Trevian Bell steps up in clutch victory over UIC

According to Green Bay head coach Linc Darner, when its postseason tournament time you need unsung heroes to emerge. “Normally to win the conference tournament you’ve got to have one or two guys that maybe haven’t played as well as they were hoping and then they get in […]

Green Bay’s much maligned defense showed up in a big way Thursday night at the Resch Center. The Phoenix – who came into the game ranking towards the bottom in nearly every defensive statistical category – held Oakland to a season-low 54 points en route to a 66-54 […]

Last Tuesday, Green Bay Phoenix head coach Linc Darner said his team could easily be 0-3 after the first three games of the Horizon League season. Using that logic, Green Bay could easily be 0-5 after a miserable two game trip to Michigan. Instead, the Phoenix fell to […]

It’s been a wild beginning to the conference season for the Green Bay Phoenix mens basketball team. Despite facing what could be the league’s easiest schedule so far, the Phoenix trailed by double digits in each of their first three Horizon League games yet enter week three of […] 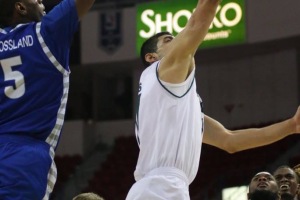 Sukhjot Bains makes the most of his opportunity

With their backs against the wall, the struggling Green Bay Phoenix needed someone besides senior Khalil Small to step up and make a play. Green Bay entered Wednesday night’s contest against Eastern Illinois just 1-4 against Division I opponents so far this season and trailed the Panthers at […]