The Green Bay Phoenix men’s basketball team is heading into 2020 on a high note.

The Phoenix sit at 1-1 after its first two Horizon League games of the season after a splitting the conference’s toughest road trip, winning in convincing fashion against preseason #2 pick Northern Kentucky on Monday after coming up just short at league-favorite Wright State on Saturday.

Green Bay beat the Norse 73-59 at BB&T Arena in a game that was never seriously in doubt after seeing a 5-point lead evaporate in the final minutes against the Raiders in a 90-84 loss.

Monday’s win was just the 7th loss NKU has suffered in their last 54 home games, including a 17-1 record at BB&T Arena last year. The Phoenix also snapped a 5-game losing streak overall against Northern Kentucky with the win.

“That was the elephant in the room, and we addressed that,” assistant coach Richard Davis told Brian Kuklinski after the game on WDUZ radio. “The biggest thing was that we felt like we gave the game away on Saturday. So we had to get the split.”

“But we wanted to come in here and kind of put the league on notice. Our guys sat down and did what we wanted to get done tonight.”

Green Bay continued its streak of hot shooting making 47.4% of its shots from the floor and 41.2% (7-17) of its three-point attempts. In the four games since shooting a season-low 33.3% in a loss against Evansville back on December 14th, the Phoenix are shooting 52.3% from the floor and 46.4% from beyond the arc and have gone 3-1 in those games.

They jumped out to an early 10-0 lead and never looked back leading by as much as 24 with 5:36 left in the second half before the Norse were able to whittle the lead down to the final margin during mop-up duty late in the game.

The Phoenix also won the rebounding and turnover battles and held NKU to just 37.7% shooting, a season-best against a Division I opponent, and a measly 19.2% on threes (5-26).

It was an impressive win, especially considering the team was coming off a near-upset win only a couple of days prior at the Nutter Center. 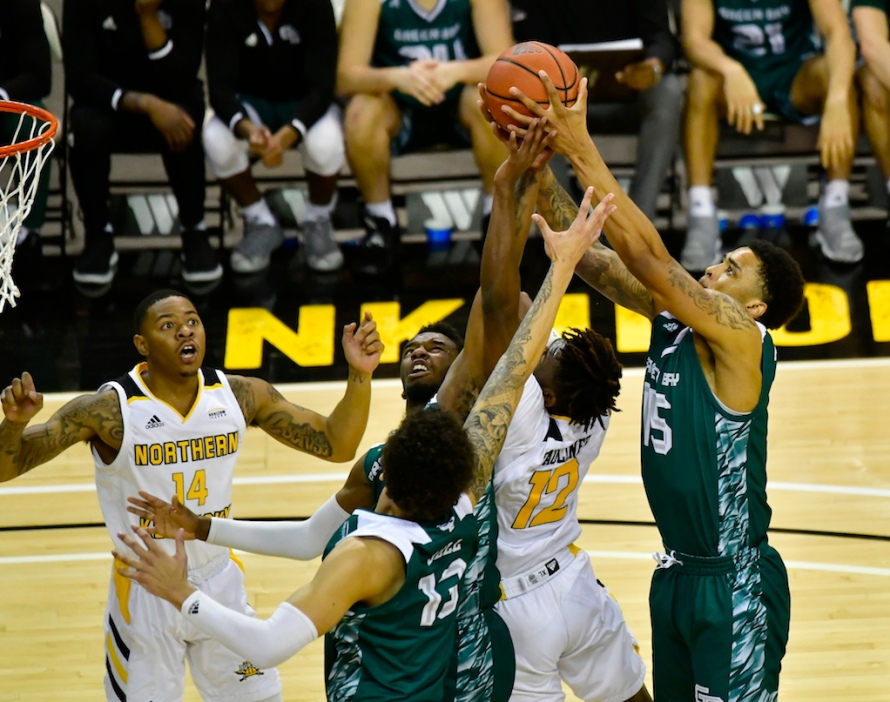 Green Bay trailed by as much as 13 with 3:29 left in the first but battled back to cut the deficit to just 6 at halftime thanks to a 10-3 run to close the half.

The second half was a back and forth battle with the Phoenix taking a two-point lead with 9:59 to play and eventually led by 5 at 75-70 with 4:59 left after a Kameron Hankerson jumper.

But Wright State would score the next 13 points after Green Bay would go nearly four and half minutes without scoring to open up an 8 point lead before freshman Amari Davis made a pair of free throws with 27 seconds left to end the drought, but it was too late. The Phoenix cut the lead to 4 with 10 seconds left but clutch free throws from Cole Gentry sealed the win for the Raiders.

“I thought we played extremely well,” head coach Linc Darner told Kuklinski on Monday prior to the NKU game. “For 30 minutes I thought we were the better team on the court, but for 10 minutes they were.”

Wright State dominated on the boards and in the paint winning the rebounding battle 50-29, with 18 of their 50 rebounds being offensive rebounds, and outscoring Green Bay 32-16 in the paint.  All-Horizon player Loudon Love (22), Gentry (21), and Wisconsin-native Billy Wampler (20) all scored 20+ points for the Raiders.

Still, the game was there for the taking thanks to efficient Green Bay offense and another solid shooting performance. Just like in non-conference games against Purdue, New Mexico, and Xavier, the Phoenix hung around for most of the game. But it was another late run that doomed them.

“It’s our problem. We’ve tried to correct it, I just don’t know if we’re going to. When other teams make runs we shoot the ball quicker. They went on a run and we came down on two or three different possessions where we made zero or one pass and got a charge, took a tough three, took another tough shot.”

Green Bay was led by Davis’ 18 points and 16 points each from Hankerson and JayQuan McCloud. Sophomore Will Chevalier scored a career high 11 points on 4-6 shooting, including 3-5 from behind the arc, to provide a big boost for the Phoenix off the bench.

Despite the loss Green Bay showed they can play with the top two teams in the league, even though there are still things that need to be improved on such as making smarter plays offensively while the other team is on a run.

“We were scoring because we were moving the ball and attacking and making them have to guard us,” Darner said. “When you make one pass or no passes and they’re on a run it doesn’t help us.”

“We’ve got to do a better job. It’s an area that we’ve struggled in and our guys have to do better with it.”

The Phoenix will now return home for five straight home games starting with UIC on Friday night and IUPUI on Sunday afternoon.  Green Bay will try and rack up some early conference wins as they will play seven of their next nine games at home.

With the toughest road trip out of the way with a successful split, there is renewed optimism as Horizon League play kicks into high gear.

“It’s huge,” Davis said after the NKU win. “Any time you go on the road and you can get a split it’s huge but coming on this road trip it’s tough.”

“We felt like [Saturday] we gave that game away.  Back and forth, we were up 5 and we had a chance to go up 7 but we rushed a shot or we turn it over or take an ill-advised shot. So we told them we have to learn from those moments. You saw [Monday], we didn’t rush or panic a lot. Even when they made a run or felt like they were threatening, we didn’t rush or panic. We stayed with what we had to do.”

“We didn’t rush or panic, we just stayed the course and it paid off for us.”