The Horizon League Tournament comes to a close tonight at the Indiana Farmers Coliseum on the Indiana State Fairgrounds with Wright State taking on Northern Kentucky to determine who will go to the NCAA Tournament. It marks the final year of an original three year agreement to play […]

With the 2019/2020 season officially in the books, Jim Sarow joins the podcast to recap Green Bay’s conference tournament quarterfinal victory over Oakland and semifinal loss to Northern Kentucky and give an overall review of the Horizon League’s first neutral site tournament in Indianapolis. Plus, Hunter Crist is […] 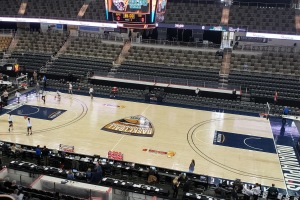 The Green Bay Phoenix are back in the Horizon League Tournament semifinals and are two wins away from their first NCAA Tournament appearance since 2016.

Second half surge sends Green Bay to the semifinals

It was appropriate that the Green Bay Phoenix and Oakland Golden Grizzlies got to play a rubber match on Thursday night. The two teams split their regular season series with each team winning on their home floor by four points resulting in an aggregate 161-161 tie heading into […]