Without question, one of the most difficult things the Green Bay Phoenix mens basketball team will have to do this year is replace the production of former star Khalil Small. The 6’3” guard led the team last season in minutes (1130), points (602), rebounds (222), assists (110), and […]

Where will Green Bay finish in top heavy Horizon League?

On paper, it is pretty clear who the top three teams in the Horizon League will be this season. Oakland returns almost everyone of significance and adds Illinois transfer Kendrick Nunn to an already talent roster. Northern Kentucky won the conference tournament after an impressive third place regular […] 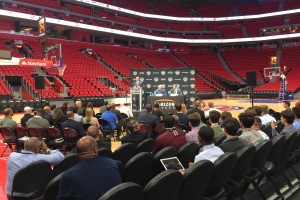 The Horizon League announced its preseason predictions and all-league picks at the conference’s annual Media Day on Friday morning with Green Bay being tabbed to finished 6th. Media Day was held at Little Caesers Arena, the brand new $862.9 million arena in downtown Detroit that will be home […]