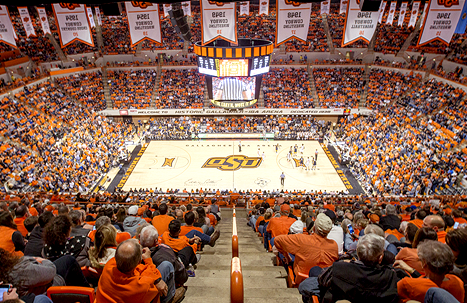 Green Bay’s non-conference schedule for the 2020/2021 season continues to take shape and we now know who the Phoenix will face in the season opener.

GB will travel to Stillwater, Oklahoma and take on the Oklahoma State Cowboys of the Big 12 Conference on Tuesday, November 10th in what will be the first game of the season for both teams. The Phoenix and Cowboys have never played before.

OSU finished 18-14 last season with a NET ranking of 64 but have the #9 recruiting class in the country next season according to 247 Sports including the nation’s #1 prospect – 6’6″ guard Cade Cunningham – as well as another top 100 prospect in 6’2″ guard Rondel Walker joining the program as freshmen this fall.

The game against Oklahoma State adds another known date and opponent to Green Bay’s eleven game non-conference schedule. The Phoenix will play four games as part of the Gotham Classic: at Syracuse, at LSU, and games against Mercer and Jacksonville State at a location to be announced.

In addition to playing at Wisconsin in Madison, Green Bay was scheduled to host Eastern Illinois (December 5th), Northern Illinois, and Montana State at home this season, though one of those home games may be getting bought out or pushed off until 2021 to make room for an additional buy game against a power conference team according to the Green Bay Press Gazette.

The Phoenix will also play one home game and one road game as part of the inaugural Horizon League / Summit League Challenge on November 17th and 21st.

The state of Wisconsin’s top uncommitted 2020 prospect – 6’8″ forward Terrance Thompson – is reportedly nearing a decision on where he will play college basketball next season and Green Bay is among the favorites to land him.

The La Crosse Central star “expects [his decision] to be made by the end of April” according to the La Crosse Tribune with Green Bay and Atlantic 10 Conference member Duquesne being in Thompson’s final two according to Prep Hoops Wisconsin, though the Tribune notes he is “still talking to a couple of additional schools.”

Thompson reportedly had recruiting interest from several schools including Bradley, De Paul, UIC, Milwaukee, Missouri State, Texas A&M Corpus Christi, and Toledo among others. He is the 8th ranked prospect in the state according to Prep Hoops Wisconsin’s 2020 player rankings and averaged 14.3 points per game this season as a senior.

Along with Johnny and Jordan Davis – who have both committed to Wisconsin – he helped lead La Crosse Central to a 20-5 record and a #2 seed in the WIAA Division II state tournament. The Red Raiders had just knocked off #1 seeded Onalaska to advance to the sectional final, one game away from state, when the season was abruptly cancelled due to the COVID-19 pandemic.

Thompson is a solid rebounder and defender but also added the three point shot to his offensive arsenal the past couple of years knocking down 47.2% (17 for 36) of his long range attempts this year according to the Tribune. His size, athleticism – he also starred on the football field as a tight end last fall – and shooting would be a natural fit in Green Bay.

The Phoenix have a scholarship open due to the recent departure of soon-to-be senior Trevian Bell.

Tre Bell will transfer to Lewis University, a Division II school in Illinois