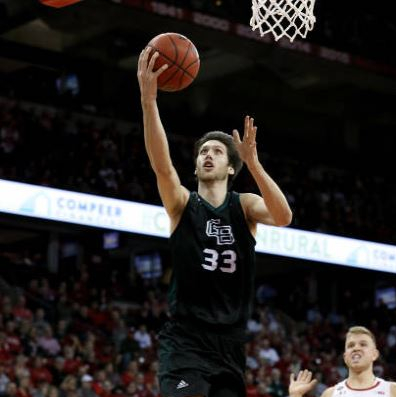 But in the 5 game CIT run, he boosted his scoring up to 8.4 points per game while grabbing 3.2 rebounds thanks to 40.0% three-point shooting and a much more efficient 51.6% shooting from the floor overall.

Schwartz has continued his solid play so far through the first month of this season. Playing a more significant role through the first 7 games of the year, he’s the team’s fourth leading scorer at 10.0 points per game and the team’s leading rebounder at 4.6 per game while averaging nearly 24 minutes per contest.  He’s also shooting a remarkable 48.0% from beyond the arc and an efficient 53.3% from the floor.

A few negative message board posts earlier this month seemed to have caught the eye of Schwartz and assistant coach Richard Davis, something Davis believes the player may be using as fuel to prove the doubters wrong.

Regarding Schwartz’s recent run of solid play, Davis said “I think a lot of that has to do with some people talking about Cody,” he told Brian Kuklinski on WDUZ radio after Green Bay’s 98-72 throttling of Montana State on Saturday night. “These guys are student athletes, they hear things. But they also read message boards and people talked about how Cody shouldn’t be playing here, he should be playing D3. And I think Cody is sending a message to those people. And if they’re listening that’s good.”

“But I think he’s sending a message. He can play, he’s tough. And he has, he’s embraced that and he’s probably our best interior post player. He’s moving his feet, he’s getting deflections, he’s flying in for rebounds. But we also stay on him because we know he’s better than what he’s shown.”

In the three games last week, Schwartz played even better averaging 11.7 points and 4.7 rebounds per game while shooting 57.1% from beyond the arc and 59.1% from the floor. He scored 13 points in each of Green Bay’s two victories last week over Cal State Northridge and Montana State and has reached double figures in scoring in 4 of the team’s 7 games so far this season.

The senior who played his high school basketball at nearby West De Pere is having his best collegiate season of his career so far and leads the Horizon League in true shooting percentage according to SportsReference.com, an advanced stat that measures shooting efficiency taking into account 2-point fields, 3-point field goals, and free throws.

He also ranks 5th in the conference in Defensive Rebounding Percentage (an estimate of the percentage of available defensive rebounds a player grabbed while he was on the floor) behind Loudon Love, Elyjah Goss, Dantez Walton, and Xavier Hill-Mais and ranks 7th in the league in Player Efficiency Rating behind Love, Walton, teammate Amari Davis, Marcus Burk, Dairus Quisenberry, and Hill-Mais.

Schwartz will look to continue his run of good play when Green Bay takes on Xavier in Cincinnati on Wednesday night before playing at Eastern Illinois on Saturday and at UCF next Tuesday.

The Phoenix finally return home on Saturday, December 14th when they take on Evansville at the Resch Center.