For the first few minutes of Tuesday’s game it appeared the Green Bay Phoenix would be in for a battle.

The Phoenix committed six turnovers in the first five minutes of the game as they tried to get a handle on Florida International’s “havoc” style of full court pressing defense installed by their first-year head coach Jeremy Ballard. He comes from the Shaka Smart coaching tree and his Golden Panthers play the fastest tempo in the country according to KenPom.com, even faster than Green Bay which came into the game ranked #10 in tempo.

“We came out a little bit sluggish, I think it was us getting used to the way they press,” Green Bay assistant coach Ben Swank told Brian Kuklinski on WDUZ radio after the game. “We finally figured out once we beat it that we can push and get a good shot.”

“Once we did that we really put it on them and started to play well.” 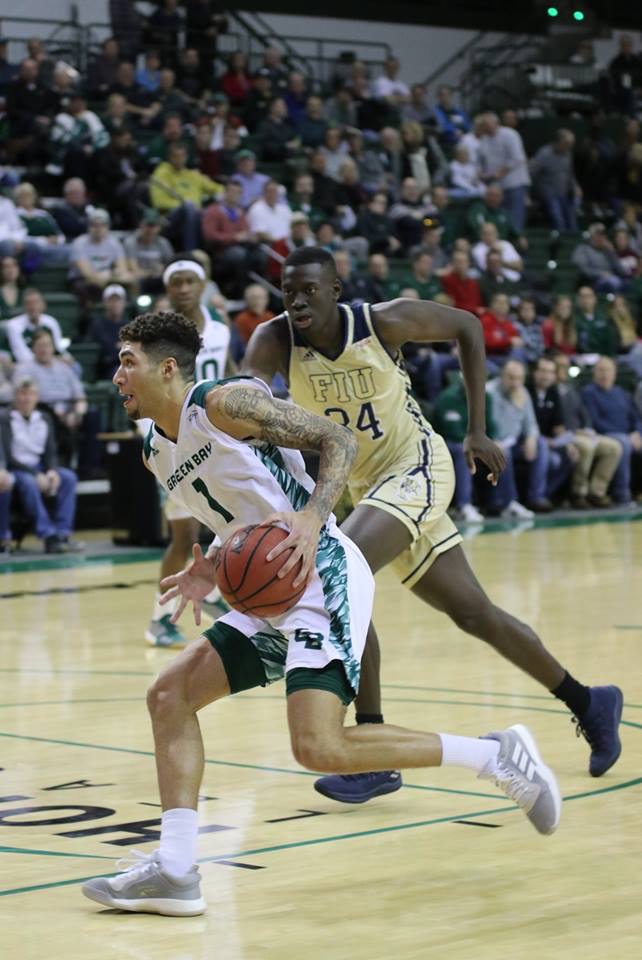 Things didn’t get any easier for FIU in the second half as the Panthers could not get many stops and struggled shooting the ball offensively.  Much like Green Bay, FIU relies on their defense to lead to easy offensive opportunities and with their press faltering the opportunities were few and far between.  The Panthers shot 32.3% in the second half and 34.8% for the game, including a mere 14.3% (4-28) from behind the arc.

When it was all said and done, Green Bay walked off the Kress Center court with a 98-68 victory and advanced to the quarterfinals of the CollegeInsider.com Tournament for the first time.

“We broke [their press] and scored some on them early,” Swank said. “I think it kind of broke their will a little bit with them pressing and they didn’t pressure as hard. They didn’t come back and do as much trapping because we were beating it and scoring.”

“Good job from our guys of getting past the press and getting good shots and making good decisions.”

Green Bay was led by senior Sandy Cohen who scored 20 points and grabbed 10 rebounds before sitting out a significant amount of the second half as Green Bay led by as much as 36 points. In addition to 17 from McCloud, the Phoenix also received contributions from Tank Hemphill (12 points, 9 rebounds) and 10 points each from sophomores Trevian Bell and Manny Patterson. All eleven Green Bay players scored in the game.

FIU entered the game 12th in the nation in scoring at 82.7 points per game before being held to 68 on Tuesday night. The Panthers were also 20-8 when committing less turnovers than their opponents.  Green Bay turned the ball over 20 times compared to 19 for FIU but the Panthers were only able to turn those 20 turnovers into 25 points.

Up next for the Phoenix is a quarterfinal matchup with Cal-State Bakersfield at the Kress Center on Friday night at 6:00 PM. The winner will advance to the semifinals on April 2nd with the championship game taking place on April 4th on CBS Sports Network.

Marshall (21-14) has already advanced to the semifinals after defeating Presbyterian on Tuesday night in a quarterfinal matchup.