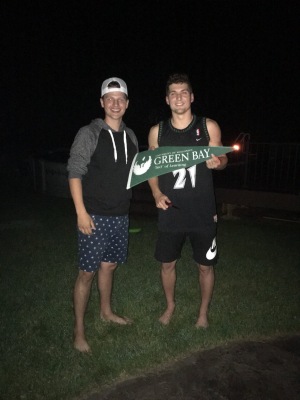 “Growing up in Wisconsin, it was always my personal dream to play for the Badgers,” former Green Bay point guard Trevor Anderson wrote on Twitter back on May 3.

After that post announcing his decision to give up his scholarship at Green Bay and transfer to Wisconsin to be a walk-on, everyone said the right things.

After all, who can fault a kid for wanting to follow his dream?

Anderson seemed complimentary of the Green Bay program in his Twitter post and even went as far as saying it was an “extremely difficult decision.”

“I want to thank Coach [Linc] Darner for all he has done for me in the two and a half years since he started recruiting me,” he wrote. “I have nothing but love towards him and the coaching staff. To my teammates, I consider myself blessed to have played along side you this past year.”

“Never underestimate the gratitude I have towards all of you, Coach Darner, Coach Herbst, and the Green Bay staff.”

The decision left the Phoenix with an unexpected open scholarship nearly a month after the college basketball signing period opened last April.

Even after Darner wasted over two and a half years recruiting and coaching Anderson – the 3-star point guard was the first player Darner offered a scholarship to after taking the Green Bay coaching job in 2015 – the staff took the high road after Anderson’s decision.

“It has been Trevor’s dream to play at Wisconsin growing up,” Darner told the Green Bay Press-Gazette at the time. “We enjoyed the opportunity to coach Trevor and getting to know his family. We wish him nothing but the best moving forward.”

So when a photo recently surfaced of Anderson burning a UW-Green Bay pennant, it rubbed a lot of Phoenix fans the wrong way.

It is unknown when the since-deleted photo was taken but it is clear his departure from Green Bay was more acrimonious than Anderson was letting on at the time.

He is sitting out this season at Wisconsin due to NCAA transfer rules and will have three seasons of eligibility remaining starting next year. It remains to be seen what sort of role the walk-on will have in Madison for the remainder of his career.

“Green Bay gave me a lot of good opportunities,” he told 247Sports in May. “I heard a lot of good things out of their mouths and stuff they told me would happen. I came in and started right away.”

“I felt like I needed to try something new.”