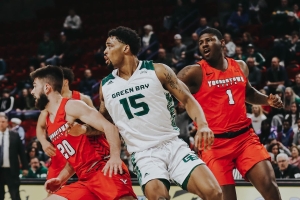 You can make a very good argument that the past week was the best basketball Manny Patterson has played so far in his collegiate career. The 6’8” junior forward from Chicago averaged 11.0 points, 8.0 rebounds, and 2.7 blocks per game in his last 3 games – all […]

Second half surge sends Green Bay to the semifinals

It was appropriate that the Green Bay Phoenix and Oakland Golden Grizzlies got to play a rubber match on Thursday night. The two teams split their regular season series with each team winning on their home floor by four points resulting in an aggregate 161-161 tie heading into […]

The #3 seed has not fared well ever since the Horizon League changed its conference tournament format from the #1 seed hosting to a neutral site venue four years ago.

For the third season in a row the Green Bay Phoenix have a player named First Team All-Horizon League.