The Green Bay Phoenix men’s basketball team is back to full health. Well, at least as healthy as they will be with Tank Hemphill already declared out for the season with a lingering tendinitis issue.

With the Green Bay offense sputtering out to a 14-2 deficit to start Wednesday night’s season opener at Purdue, head coach Linc Darner turned to his highly touted freshman Amari Davis in search for some answers. And Davis immediately delivered.

It’s been an impressive three game run in the CollegeInsider.com Tournament so far for the Green Bay Phoenix. 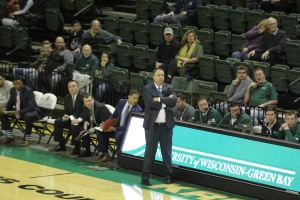 Green Bay head coach Linc Darner received a one year contract extension thanks to the Phoenix fourth place finish this year, according to the Green Bay Press Gazette. According to the newspaper, “part of Darner’s revised contract when [athletic director] Charles Guthrie took over for [Mary Ellen] Gillespie […]

The Green Bay Phoenix men’s basketball season is not done yet. The team has accepted a bid to the CollegeInsider.com Tournament and will face East Tennessee State on the road Wednesday night.  It will be Green Bay’s second time appearing in the CIT with their last appearance being […]