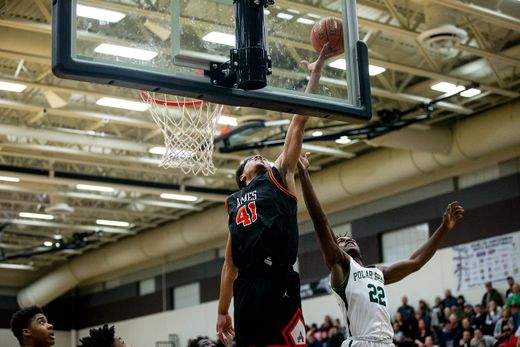 One future Green Bay player is putting the finishing touches on a stellar senior high school season, and he’s not done yet.

Japannah Kellogg, a 6’6” forward from Ames High School in Iowa, helped his team reach the Class 4A state tournament by contributing 15 points in his team’s 63-54 victory over Des Moines North on Tuesday night in the substate finals.

The Little Cyclones now advance to the state tournament at Wells Fargo Arena in Des Moines where Ames (17-4) is the #7 seed out of 8 teams in the field and will take on the #2 seed North Scott on Tuesday night.

Kellogg has been one of two go-to guys for Ames this season and is the team’s leading rebounder and second leading scorer behind freshman phenom Tamin Lipsey, who already holds a scholarship offer from Iowa State and is garnering interest from Iowa and North Carolina.

He has good size for a wing and can play multiple positions, including anywhere from spots one through four, which makes him a perfect fit for Green Bay’s position-less basketball style.

“Kellogg is a long, lanky wing who can slash to the bucket as well as he can spot up from the corner,” the Des Moines Register’s scouting report says. “At 6-6, he has experience running the point in high school, so his dribbling ability is more that of a shooting guard than a small forward.”

He also has plenty of athleticism placing second in the high jump at the Iowa state track and field meet last year.

He signed his letter of intent back in November and will join 3-star prospect Amari Davis to form Green Bay’s 2019 recruiting class.

But first, Kellogg will look to bring another state championship back to Ames.  The program has won eight state championships including back-to-back titles in 2009 and 2010 when current-NBA players Doug McDermott and Harrison Barnes played for Ames.

“Japannah comes from a very good high school program at Ames and he’s a player that has some of his best basketball ahead of him.” Phoenix head coach Linc Darner said back in November announcing the signing. “He can play multiple positions on the floor and we’re excited because he fits the style we want to play.”

“Japannah can step out and shoot and finish at the rim, and we look forward to having his talent here in Green Bay.”