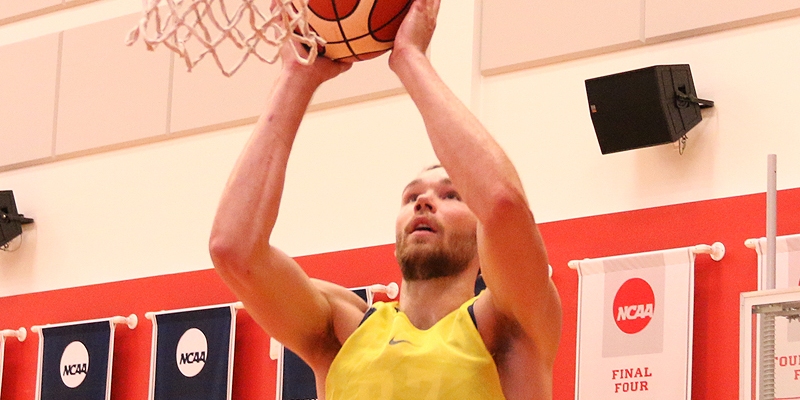 'Nix in the Pros

Alec Brown will play for Team USA in FIBA AmeriCup 2017

Former Green Bay Phoenix star Alec Brown is training in Houston this week as part of Team USA’s roster for the 2017 FIBA AmeriCup.

The 17-player camp at the Guy V. Lewis Development Facility on the University of Houston campus was a tryout to select the 12-player team that will take part in the AmeriCup in a couple weeks in Uruguay and Argentina.

The week long camp ends Thursday before the US squad will head south to Uruguay for the tournament. Roster cut downs were announced Monday night and Brown was among the players selected for the team.

Jeff Van Gundy, a former NBA head coach and current analyst on ESPN, will coach the team at the event which features 12 teams from the 44-team FIBA Americas confederation. The tournament started in 1980 and has been held every two years but will change to a once-every-four-years format following the 2017 competition.

“All 17 guys that came to camp in Houston had a strong case that they could have made that they should have been selected, but unfortunately, we could only take 12,” Van Gundy said via USA Basketball’s official website.

“It was very, very difficult getting down to that number, but we feel very happy with the guys that we have selected. We feel we have positional versatility, we have a good balance between size and quickness, so it will be interesting for us to go to Uruguay and see what we can do.”

Team USA has taken part in the event nine times in its history, winning the tournament six times while finishing second once. Overall, the US is 60-10 in games at the event. It last took part in 2007 when the USA won gold to clinch a spot in the 2008 Olympics in Beijing.

The AmeriCup is no longer part of World Cup or Olympic qualifying, however. Those will now be separate events. Qualifying for the 2019 World Cup in China gets underway this November.

This year’s AmeriCup is the federation championship for North and South America. The 12 teams are separated into three groups of four with the champions of each group advancing to the semifinals. Argentina will automatically be in the semifinals since they are considered the hosts of the event.

The USA’s group, Group C, consists of the Dominican Republic, Panama, and Uruguay with games taking place Monday, August 28th through Wednesday, August 30th in Montevideo, Uruguay. The semifinals and final will be September 2nd and 3rd in Cordoba, Argentina.

The 7’1” Brown will officially be going back to Spain after his Team USA duties are complete as he has signed with Estudiantes in the ACB. He played last season in the NBA D-League with the Windy City Bulls where he averaged 10.2 points and 5.2 rebounds per game before joining Estudiantes following the D-League season.

Brown was impressive in his short stint in Spain last season, averaging 14.5 points and 2.0 rebounds per game in his 6 appearances. He made 63.6% (14/22) of his three point attempts with Estudiantes last season.

A 2nd round NBA Draft pick in 2014, Brown has played professionally for the Bakersfield Jam and Windy City Bulls in the D-League as well as Obradorio and Estudiantes in Spain. He also has played in the NBA’s Las Vegas Summer League the past few seasons with the Phoenix Suns and Los Angeles Lakers.

Brown was a four year starter at Green Bay from 2010 to 2014 and scored 1,678 career points – 6th all-time on the Green Bay scoring list. He also collected 800 rebounds (4th in program history) and a program and Horizon League record 309 blocks while with the Phoenix.

Categories: 'Nix in the Pros